Beyond gender figures, the business case for diversity and inclusion June 2021 – Six women leaders representing the most powerful international organizations, from Kristalina Georgieva, Managing Director of the International Monetary Fund (IMF), to Christine Lagarde, President of the European Central Bank (ECB), and Ngozi Okonjo-Iweala, Director-General of the World Trade Organization (WTO), published a joint statement on gender equality asking leaders of the world to take a bold commitment to close the global gender gap. Why is this call for action so important? Simply because if we do not act now, it will take 135.6 years to reach relative equity. “That is an entire generation of girls robbed of the opportunity, before they are even born, to stand on equal economic footing as male counterparts.”

Closer to us in Mauritius, we have seen across the business community a bold commitment at leadership level to articulate a management case for promoting gender equality from inside – ranging from good intentions to tangible targets. We are indeed at a critical moment in history where the world is looking for more equity, with the Covid-19 showing that women have been disproportionately affected, both economically and socially – from unemployment at 13% in December 2020 to unpaid work, 3 times more for men. In 2020, just 15% of the companies on Fortune’s Global 500 lists were led by women.

Unfortunately, Mauritius follows the same trend: women remain underrepresented, often dramatically so in positions of power. From 30% of women at management level to 8% of women on boards, the figures confirm that much need to be done to close the gender gap, beyond an objective of social justice or general financial performance

However, there are tremendous areas for opportunities if we look at the world with a gender lens: a McKinsey report in 2020 estimates that tackling gender inequality will add USD 13 Trillion to global GDP by 2030, and this is particularly important if we consider that 80% of global spending is directly influenced by women.

I vividly remember walking into the offices of CEOs, five years back, to pitch a transformational leadership programme for women in Mauritius, the KIP Leading Women Programme. The first question asked in the most candid way was: “Why should I invest in a 100% female leadership program? What type of incentives or results can it bring?” Or from women leaders themselves who were not willing to promote this “singularity” even if systemic discrimination had been detrimental to their own career development and promotion in the past.

While gender equality has never been so high on the sustainability agenda of many organizations, researchers did not find conclusive correlation between increased diversity and improved financial outcomes. Rather what they have found that increased diversity fosters higher quality work, better decision making, greater team satisfaction and more collaboration. For example, evidence-based research has shown that whenever there is a conflict, women exhibit more empathy and are better listeners. They have trusted relationships, have a stronger sense of ethics and build more resilient teams. Of course, this naturally leads to greater performance. Further, too much focus on financial performance for minority “segments” could backfire by insidiously questioning whether women really belong to that same organization in the first place. 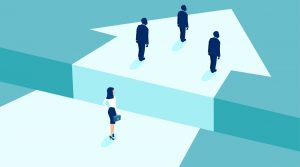 In a certain way, the topic of inclusion needs to be embraced with the same seriousness as diversity to allow female talents to view their organization as a preferred one. This will imply to create and implement opportunities for people to work towards shared goals in mixed gender groups and set genuine collaboration as an expectation of such teams. Indeed, many organizations may have gender targets but not necessarily a dedicated plan and inclusive norms to advance gender equality.

First, an inclusive culture will need to document diversity to foster inclusion. Indeed, to achieve sustainable change, we need accurate gender data at each step of career development, monitoring pay gaps and other discriminating practices, allowing team members to learn from each other and be valued and respected for their differences. This may also imply to deal with sensitive issues allowing intersectionality of gender data with other socio-economic or cultural criteria.

Secondly, talent management teams should be accountable for this change by offering visibility and growth that are equally accessible to both men and women, through incentives and rewards, mentoring, and neutral hiring/ promotion processes; in a nutshell, promoting gender equality by design and not trying to debias mindsets.

“If we do not act now, it will take 135.6 years to reach gender relative equity”

Finally, leaders at the top need to embrace this new learning paradigm by creating a safe and trusted workplace where everyone will feel valued, respected and learn from each other’s differences. By contrast, viewing gender diversity simply as something to be promoted for moral reasons or legitimacy to match diverse markets or meet a governance goal does not lead to sustainable performance. On the contrary, it can even be perceived to be detrimental to workgroup functioning if some members of the team feel excluded. Moreover, leaders will have to view diversity and inclusion (D&I) programs as part of an overall strategy of moving towards a learning organization. This is where innovation starts, when an inclusive work environment creates space for crucial conversations on cultural differences and competencies…

Lillka Cuttaree is the director of the KIP Center for Leadership and JKC Foundation. Former Director at the Economic Development Board, she has launched a number of start-ups in the area of executive education, consulting and entrepreneurship, with a specific expertise on gender policy and empowerment, investment promotion and international trade. In 2018, she created with the support of Harvard Kennedy School (USA) the Blossom Initiative to empower women and girls in the region.